I have a few things this week.  First topic is Kenny Wallace, everybody loves him, for his energy, laugh and charisma.  But this week he showed he’s a true professional and racer.  While racing his dirt modified in Ocala Florida at Bubba Raceway Park, he screwed up.  While running hard he went into a corner a little hot and to avoid hitting the car on the outside he slowed and caused a huge pile up behind him taking out half of the field.  When he re started back in 25th he felt so heartbroken for what he had caused he thought about simply pulling off the track.  But he did not want to let his team down so he kept charging.  After the race he apologized to all the competitors and sent texts out.  Way to go Herm for publicly taking full responsibility for your actions, like a true professional would. 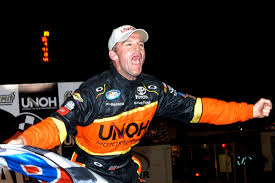 Next good thing to come out of this week was about Michael Waltrip.

Mike announced this week that he will compete in this years Daytona 500 driving the #83 for BK Racing.  The car will carry Maxwell House sponsorship.  Mike always runs great in Daytona so fingers crossed for him.

Finally we now know Tony will be out of the car for the start of the season.  When will these drivers and their major sponsors agree to no reckless behaviour off the track.  Jimmie surfing on top of a golf cart, Denny playing basketball, while not reckless, blows knee out twice, Tony injured , twice not in his Sprint car, these drivers are investments and should be carefully protected as such.