As many people know, there’s one thing that is true, my love and passion for NASCAR is very strong.  I’ve been a loyal fan of this sport since the mid-eighties, and because of this love I’ve created my own website as well as write for two more.  But after 5 or 6 months of social media tag, and calls and tweets to his agent and friend, and to this driver and his wife, it all came together.

I was so thrilled to have Jeremy Mayfield phone me and take some time out of his day to answer the long awaited questions I had lined up for him.  There has been much said and printed about Jeremy in the last few years with the majority of it being bad and untrue.  You won’t find any of that here, yes I searched him and his lovely wife, Shana, out for months, but my purpose was not to climb on the bashing wagon, it was to get the answers to the questions I wanted to ask.

I’ve heard and read all the press and I’ve seen this former NASCAR power couple dragged through the mud, I think it was all so unnecessary.  I had the pleasure of having an honest and frank discussion about some of the accusations, and like the former 17 year NASCAR professional driver he was, he was clear, to the point and very honest.

Dion Fellows is first a friend to the Mayfield’s, and second, working for them as their representative, working on fundraising efforts and working to attract sponsors.  And through his work we were able to get this phone interview done.

The one thing Dion kept telling me is. “He’s busy hustling and working, but if you could meet him and talk to him, you would see how down to earth and friendly he is.” So I asked Jeremy what he was up to  and what he does everyday and his answer was so typical of a true race car driver. He is up early every day and at his shop that houses his modified and his dirt cars.  He has been competing in the KOMA Southern Modified Series.  He is quick to point out that he runs well, leads laps and runs up front.  And that is quite obvious finishing 6th in points in 2015.  He told me that he loves the series and it’s competitive without all the drama other racing series seem to bring.

While he admitted that he and Shana don’t talk with many of today’s drivers from the Cup garage he understands.  He says some might not want to stick their necks out to reach them in fear of repercussions, and he’s okay with that.  He doesn’t watch the races on Sunday as it’s too painful because he still feels he should be out there.  He does still follow NASACR and the new rules and in’s and out’s.  He holds no hard feelings towards anybody, he said it’s a long time ago, he and Shana have moved on.  I told him I believe he could still compete at a high level and run better than half the field you see on race day.  He simply said, “Thank you, that’s nice of you to say that”.

Jeremy’s plans this year are to run again in a number of KOMA Series races but he would like some sponsors to help with the cost.  Last year, he funded himself and finished 6th in points.  Imagine what he could do and where he could finish with funds behind him.  On average it would cost $2500 to $3000 a race or $100,000 a year.  I recently did a piece on NASCAR funding, where it can cost up to $35 million a year for sponsorship.  If anyone is interested in having a 17 year NASCAR  professional driver as their driver in the KOMA  modified series, seems to me that’s a pretty sure bet to win a championship at a mere cost, compared to Cup racing these days. 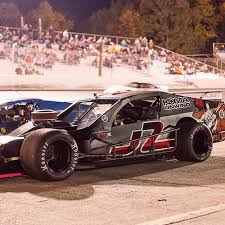 I assured Jeremy I will do everything I can to help him as he moves ahead in the future, whatever that may hold.  Why you ask? I ask you, why not? They have been great dealing with me and while they are living a nice quiet life on the lake in North Carolina, everybody could use a break every now and then. I believe good things happen to good people, so Jeremy and Shana, your time is coming.

As I finish this I can’t help but smile, I have Jeremy Mayfield as a contact in my phone, and had the best afternoon talking with him. Cross another off my NASCAR bucket list, I have a new friend, and he’s still a NASCAR star in my book. 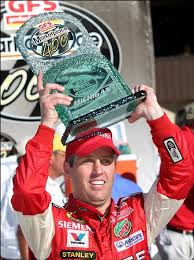