I’ve been so busy the last few weeks I haven’t had time for this segment but today I’m finding the time.

Lake Chambers Speed (born on January 17, 1948) had 402 career starts in NASCAR starting in 1980 and finishing in 1998.   He started his racing career at the age of thirteen racing karts, much to the displeasure of his family. Over the years, Speed won the International Karting Federation (IKF) National Championship six times and in 1978 he won the prestigious Karting World Championship over, among others, future three-timeFormula One champion Ayrton Senna. Speed had been the only American to win the World Karting Championship until 2015 when 14 year-old Logan Sargent of Florida won the KFJ World Karting Championship on September 27th, 2015.

In 1980 after considering racing in other series such as Formula One, CART, and IMSA, and getting advice from current Lowe’s Motor Speedway promoter, Humpy Wheeler, Speed chose to go NASCAR racing. According to Speed, “It was the highest mountain to climb.” Speed’s relative unfamiliarity with the NASCAR scene led him to buy his first car from someone in Chicago. Speed started nineteen races in his rookie year scoring an eighth at Darlington Speedway in his third career start. Speed also scored finishes of seventh at the springTalladega Superspeedway race, eighth at Talladega’s fall event, seventh at Charlotte’s fall event and eighth at the season ending race atOntario Motor Speedway. Speed finished twenty-second in overall points and second to Jody Ridley in the rookie of the year standings.

In 1981, Speed again ran his own operation starting twenty-seven of the thirty-one races on the schedule. Lake was unable to qualify for the 1981 Daytona 500, but did manage to win the 30-lap consolation race, leading the race from start to finish. He scored a ninth-place finish in both races at Rockingham and at Bristol. He followed that up with a seventh in Martinsville Speedway‘s spring event, an eighth at the now-defunct Texas World Speedway and a sixth in the late summer Talladega event. Speed’s final top ten would come at Bristol in August where he finished seventh. The final points tally came up with Speed finishing eighteenth in points. One special footnote for Speed during the ’81 season was that he enabled future NASCAR pace car driver Elmo Langley to start his 536th and final NASCAR race at Dover in the Mason-Dixon 500. Langley started 29th and finished 29th completing only six laps before a driveshaft failure.

1982 was Speed’s first full year of competition on the Winston Cup circuit. This time, Speed was driving for the first time for another car owner, Roger Hamby. The beginning of the season was a struggle with Speed not obtaining a top ten finish until the eleventh race at Dover International Speedway. In July at Daytona, Speed scored his second top ten finish with a ninth. Speed continued to struggle as the season wrapped up managing to finish sixth in the Southern 500 at Darlington and eighth at the fall event in North Wilkesboro Speedway. Speed finished twentieth in points.

1983 was a year of major change for Lake Speed. He was now driving for an established owner in Hoss Ellington, however on a limited schedule. The team showed promise early in the season scoring a fourth at Rockingham and a sixth at Darlington. It was at Talladega where Speed’s life took a major change. Towards the race’s end, Speed was leading the field with a chance to win his first Cup race. He was beaten at the end by Richard Petty and Benny Parsons. After the race, Speed decided to change his life and become a devout Christian on August 28. The week after Talladega, Speed scored another top ten with a sixth in the World 600 at Charlotte. Speed’s final top ten of the season would be at the August Michigan International Speedway race with an eighth-place finish. Speed finished twenty-seventh in the points standings.

1984 was much the same. Starting nineteen of the series 30 races, Speed showed some early season strength with a third at Rockingham, a ninth at Atlanta, a sixth at Charlotte. At the first Pocono Raceway race, Speed qualified second and finished tenth following that strong run up with a fifth at Michigan. Speed finished eighth in the late summer Talladega race and had a near win in the Southern 500 starting second and leading twenty-eight laps before he crashed out. Speed’s final top ten was at Atlanta with a seventh-place finish and a points position of twenty-sixth.

Speed also started six races in the NASCAR Busch Series between 1983 and 1984. He only made one start in ’83 at Charlotte in the Miller Time 300 where he finished sixth. In 1984, Speed lost by two feet to Darrell Waltrip in the season opening Goody’s 300 at Daytona, and scored another top five in the Mello Yello 300 at Charlotte. Speed’s worst qualifying effort was a thirteenth place start in the season opener. Speed’s starts were fifth at Darlington, seventh at Charlotte, third at Darlington and ninth at Charlotte.

1985 was Lake Speed’s breakout season in NASCAR. Running a full schedule under the RahMoc Racing banner, Speed started off the season with a second-place finish to Bill Elliott in the Daytona 500. CBS‘ pit reporter Mike Joy conducted an interview with Speed after the race, during which the emotional driver repeatedly thanked God for the successful showing. He followed that up with a tenth at Richmond International Raceway and a fourth at Rockingham, taking the points lead early in the season. After an engine problem at Atlanta, Speed scored a string of strong runs: seventh at Bristol, ninth at Darlington, ninth at North Wilkesboro, eighth at Martinsville and tenth at Talladega. Speed then finished sixth in the World 600. The stretch run of the season took its toll on the team and Speed’s position in the points fell; however, he continued to post strong runs, finishing seventh at Talladega, tenth at Bristol, tenth at Dover and seventh and ninth-place finishes at Atlanta and Riverside International Raceway to round out the season. Overall, it was Speed’s best year in terms of points, notching a tenth-place finish.

In 1990, Speed started only six races with Prestone sponsorship, finishing two of them. The best finish of Lake’s abbrievated 1990 season came at Talladega’s Die Hard 500 with an eleventh-place effort. Speed also fielded cars for short track ace Tommy Ellis and Phil Parsons in two races. Ellis started the Delaware 500 at Dover in 31st and finished 32nd after an engine failure. In the National 500 at Charlotte, Parsons drove Speed’s car with Baja Boats sponsorship to an 18th-place run. 1991 was an improvement in terms of races started. Speed replaced Dick Trickle in Cale Yarborough‘s car but struggled with mechanical failures throughout his stint with the team. In twenty starts, Speed’s best finish was an eleventh at Bristol in August. In 1992, Speed got back to his own team starting just nine races with Purex as his sponsor. The team suffered several mechanical failures and Speed only managed to have a best finish of eighteenth in the final two races of the season at Phoenix and Atlanta.1998 would be Lake Speed’s final Winston Cup season. Speed secured sponsorship from the Cartoon Network. Speed’s best finish of the season was at Daytona in the Daytona 500 where he tangled with John Andretti with two laps to go bringing out the yellow flag that effectively won the race for Dale Earnhardt.

The 1998 season proved to be a real struggle for Lake and the Melling Racing team. It appeared as if the team was struggling with the new Ford Taurus bodies, and that translated to some terrible luck. At Sears Point Raceway, Speed appeared to have a chance to turn his season around. He was strong during the first practice session with the second fastest speed behind Jeff Gordon. In the second practice session, Speed ran over debris thrown on the track by a car who had got off course, cut a tire and slammed into one of the tire barriers breaking his sternum. Speed missed the event and was replaced by Butch Gilliland, but he returned to the next race at New Hampshire. Unfortunately, Speed was caught up in a wreck not of his own making and aggravated his injury. After the race, Speed felt it best for the team to find another driver. Speed stepped aside and was replaced by Jerry Nadeau. With Speed’s age being against him and a push for younger drivers, Speed effectively retired from NASCAR racing. Though Lake only made 16 starts during the ’98 season, he still finished 43rd in the points standings.

In 2006, the International Kart Federation established the Lake Speed Achievement of Excellence karting award in honor of the 1978 World Karting Champion. The award was presented for the first time at the IKF 2-Cycle Sprint Grand Nationals August 3–6 at Fontana, California. The inaugural recipient was Matt Johnson of Las Vegas, Nevada. Nick Johnston of Northridge, California was awarded the honor in 2007. The award went to Taylor Miinch in 2008 and Mike Botelho Jr in 2009. And youngest winner of the award went to Ryan Schartau of Chino, California in 2013. The recipient of the award could be a driver, team, kart shop or any combination thereof, and the winner is determined primarily on sportsmanship, driving achievement and professionalism during the race event.

On occasion, Speed still drives karts, and has four wins in Historic Stock Car Racing Association events on Daytona’s 3.56-mile road course in 2002 and 2003 driving one of his old 83 Purex-sponsored Ford vehicles.

Speed currently races in the World Karting Association National Road Racing Series schedule, in the Spec 125 TaG 1 and 2 classes. On July 30, 2010 Speed was inducted into the Mississippi Sports Hall of Fame. 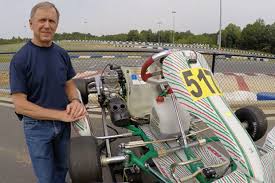